KDLG 670AM | By Kendra Kapotak

The Dillingham Wolverine wrestling team brought home two state champions in an amazing comeback last season. Those athletes continue to grapple with how the pandemic changed their approach to sports even after the season.

For more than a year, Bristol Bay students couldn’t compete against each other.

This year, sports began again. But some athletes found it difficult to get back into physical and mental shape.

In December, the Dillingham Wolverine wrestling team competed at the state tournament at the Alaska Airlines center in Anchorage.

Senior Zach Kolbe said at first, coming back to wrestling was a challenge.

For Kolbe, who has wrestled for 10 years, not competing during the pandemic was tough. But taking a break from wrestling gave him a different perspective on the sport.

“With not having wrestled last year I got to look at my life a little differently and enjoy things that I hadn't previously enjoyed and come back to wrestling," he said.

Kolbe snowmachined and trapped with his brother. Doing things he enjoyed helped him approach the end of this season with a new mindset.

“And just through that process, I just thought, 'I enjoy this, and it's not a chore. Why am I making wrestling such a chore?' It should be fun, and I should be enjoying it. And after that — it wasn't an immediate result, but there was a switch that kind of flipped.”

Kolbe enjoyed wrestling practice more, and that allowed him to push himself further.

In his last season of high school wrestling, Kolbe won first place in the 145-pound division by defeating the defending state champion. Kolbe was the #2 seed, which means he was the second highest ranked wrestler coming into the championship. He ended with a score of 8-4 in his final match and finished with three pins before winning a state title.

He was excited to see his progress at the end.

“My whole wrestling career I've made it to the semis, but I haven't been able to make it past the semis," he said. "It seems like I peaked out there. And to see the work that I put in and all the time and effort go to something was just — it was crazy and awesome to see.”

Senior Demetry Hoseth was another state champion. He won first place in the 135-pound division, defeating the defending state champion as the #1 seed.

The road to the championships was bumpy. About a year ago, Hoseth broke his collarbone. He started wrestling again, but then suffered a mild concussion just before the Lancer Smith tournament.

“It was really disappointing to me because I couldn't go to that tournament,” he said.

At another tournament, Hoseth made it all the way to the semifinals.

“I lost a match that I should have won, because I was kind of not feeling myself 100% yet," he said. "I was still pretty nervous to come back. So that was a little bit of a mental battle for me to come back from that. But I ended up overcoming that. And I felt pretty good after that."

Still, he said he wasn't nervous to compete in the championships.

"I wrestled all summer from the beginning of June to the end of July," he said. "So I felt really confident in myself and I just went out there and had fun."

Hoseth finished with three pins and one major decision before he won the state title. He said working steadily through the season’s challenges helped him through the tournament.

“Take every opportunity as if it's your last," he said. Don’t be nervous before you wrestle. Just go out and have fun and have confidence in yourself.”

Both Kolbe and Hoseth are thinking about wrestling in college this fall.

State qualifiers from the Dillingham Wolverines

As for the other finalists, freshman Ty Kolbe won second place in the 145-pound division. He had two pins to the finals but lost to the defending state champion from Glenallen.

Senior Noah Sage won fifth place in the 119-pound division. Sage finished with three pins and one decision, and his tournament record was 4-2.

Freshman Graelin Chaney won sixth place in the 152-pound division. After the first round of the tournament, Chaney drew the #2 seed. After losing his first match, Chaney then won 3 matches in a row. Two of which were pins, and the last one being a tech fall.

Junior Kiley Clouse won sixth place in the 189-pound division. Clouse's record at the state tournament was 2-3. Both of her wins were by pin.

Freshman Chase Huffman competed at the 140-pound division and ended the state tournament with a 1-2 record.

In his first — and final — season, senior David Wetter competed at the 171-pound division and ended the state tournament with a 1-2 record. Savo said Wetter rolled his ankle just as he was “hitting his stride” at the Lancer Smith tournament, which kept him off the mat until the state competition.

“I think if he didn't roll his ankle, David would’ve seen a few more matches at the state tournament,” Savo said.

In his final season, senior Thomas Tinker competed at the 189-pound division. He finished the state tournament with a 2-2 record, both wins being by pin. Tinker was one match away from placing, but due to an injury he was forced out of the tournament. Savo said, he had no doubt that if Tinker didn't get hurt, he would have placed.

Freshman Gisa Reigh competed in the 119-pound division and ended the state tournament with a 1-2 record. Savo said she finished the season strong: she won a match at state as well as being named one of the Sockeye Regional Conference’s outstanding wrestlers. Savo also said that Reigh will be building on this season to come back stronger for next season.

Senior Laci Andrew competed at the 135-pound division and ended the state tournament with a 1-2 record. Andrew wrestled with an injury to her right shoulder. Savo said that she showed a lot of growth.

“She was down 14-3 in the second win, but didn’t give up and was able to catch the Kenai girl on her back and secure a pin,” he said. 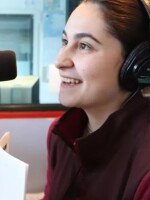